Building behaviour of the beaver

Building behaviour of the beaver

Dam-building activity [Back to table of contents] 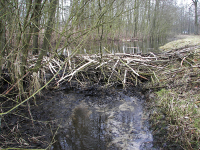 A beaver dam at the Schulenrieden-
graben. As a further prerequisite for a permanent colonisation of a waterbody by the beaver, the waterbody should not completely fall dry during the summer or freeze down to the ground in the winter (Djoshkin & Safonow 1972). But beavers can work relatively effectively against these ecological constraints by building dams. However, The animals can only build a dam in flowing waters, which are not too broad and which currents are not too strong. So, for rivers like the river Hase or the river Ems there is no risk that they may be impounded by a beaver dam.

If the animals have build a dam and if the water surface will be covered by a continuous ice cover during the winter, sometimes the beavers partly open their dam to allow the run off of a portion of the dammed water. Thereby an air cushion is build between the ice cover and the water surface so that the animals are able to swim and breath below the ice cover. Furthermore, if the water level rises, for instance due to heavy rainfall, and the nest chamber will be at risk of being flooded, the beavers will occasionally open their dams as well to allow the drainage of some of the dammed water.

Burrows and lodges [Back to the top] 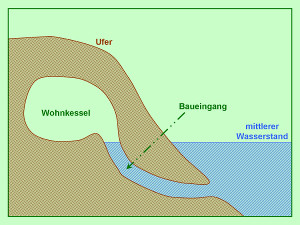 Schematic drawing of a bank den build by beavers. As already mentioned before, beavers dig their own burrows, which are used for resting and in which the give birth to their kits and raise them. In the simplest case, the bank den, the animals are digging a short tube, which will be expanded into a nest chamber at the end. The burrow entrance will be created in such a way, that it will be completely beneath the water surface. The tube will be dug diagonally upwards into the bank and the nest chamber will be build above the water line. The burrow can only be entered by diving, so the beavers inside their burrow are relatively save against potential predators like foxes or wolfs. Because the nest chamber lies above the water surface, the animals are always sitting in a dry place.

As long as a beaver burrow is inhabited, the burrow entrance never falls dry. If this should ever be the case (for instance during a very dry summer), the entrance is sometimes covered with brushwood in such a way, that it is subsequently situated below the water surface again. However, if the burrow entrance falls dry permanently and if the animals do not have the possibility to regulate the water level by the building of a dam, usually the burrow will be abandoned. 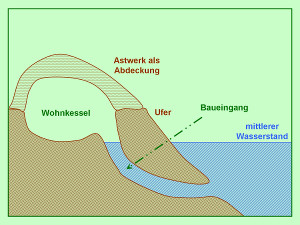 Schematic drawing of a bank lodge build by beavers. 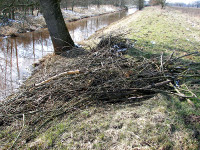 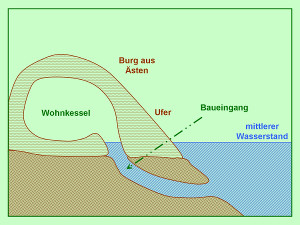 Schematic drawing of a lodge build by beavers. 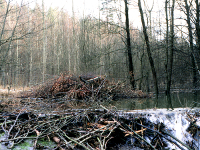 Beaver lodge with a dam in the
foreground. If the bank is not suitable for the construction of a bank den or a bank lodge, beavers are going to build a lodge. For this purpose they pile up twigs and branches at a suitable place and gnaw a nest chamber into the pile of branches from below. Partly they are going to dig a tube into the water bottom in order to get underneath the piled up branches. Such lodges are often inhabited by several beaver generations and can, depending on the size of the family, gain remarkable dimensions in height and volume.

A form of a beaver. Occupied lodges are constantly maintained by the beavers and sealed with mud and the stalks of different aquatic plants. The mud is scratched from the water bottom and transported towards the lodge by the help of the hands. Unlike primates, beavers are not able to turn the palms of their hands upwards (this is called a supination movement of the hand), so that the material that should be transported is put on the upper side of the hands and the hands are then pressed under the chin. If the animal has reached the lodge, it raises to its rear extremities and walks bipedal up to the point at which the building material is needed.

Besides the burrow or lodge of the family, which is used by all family members, within the family territory individual animals may build some smaller burrows, which are used exclusively by those individuals.

Furthermore, besides the burrows and lodges beaver also build short, aboveground tubes in the bank, which are called forms. These were visited by the animals for short resting periods during their nocturnal activity. During the winter beavers can sometimes be observed during the day sitting in these forms, especially if the form is exposed to the sun.

[Back to the top]