Social behaviour of the beaver

Social behaviour of the beaver

Importance of the castoreum

The beaver belongs to the semi-aquatic mammals, which show, besides the morphological and physiological ones, several behavioural adaptations, which are caused to some extend by their amphibian way of life (Heidecke 1992; Schröpfer & Stubbe 1992). For instance, beaver show a monogamous mating system uncommon in mammals (Kleimann 1977; Svendsen 1989; Wilsson 1971), in which the male parent invests comparably much into its own offspring. The animals are living in family groups (after Brad (1938) sometimes called "colonies") consisting of the two parents as well as the young of the current year and the subadult animals of the previous year (Freye 1978; Wilsson 1971). Usually only the adult female is reproducing in such a group (Brady & Svendsen 1981; Heidecke 1984). In the North-American beaver the reproduction of the two years old, already sexual mature offspring will be prevented by the presence of the parents, although it is not quite clear if this achieved through the behaviour of the parents or through the use of parental pheromones (or both; Brooks et al. 1980).
Up to now, it was always assumed that beavers are obligate monogamous because of their special social behaviour with a long-lasting pair-bond, the caring for the young by both parents as well as the participation of both parents in territory defence (Sharpe & Rosell 2003; Svendsen 1989; Wilson 1971). Moreover the family members show a similar composition of the anal gland secretion, which indicates that all family members are genetically closely related and thus have been emerged from the mating of a monogamous pair (Sun & Müller-Schwarze 1998b). However, it is known that in North-American beavers the pair-bond occasionally only lasts for 2 to 3 years and that in such cases at least a portion of the young animals are only half siblings (Sevendsen 1989). Furthermore, in the North-American beaver family groups the presence of more than two adult animals and of more than one lactating female has been repeatedly reported (Bergerud & Miller 1977; Crawford et al. 2008; Busher et al. 1983; Wheatley 1993). As recent genetic analysis show, the mating of non-family members seems to be more common than has to be assumed so far. By using microsatellites in the North-American beaver it could be proved, that in more than 50% of the analysed litters the females must have mated with an unfamiliar male (in most cases this was the male from a neighbouring territory; Crawford et al. 2008). Matching these findings are the observation, that in Eurasian beavers the animals react far more less aggressive towards the territory neighbours (or their scent marks respectively) in comparison to completely foreign animals (Rosell & Bjørkøyli 2002). The "split" parenthood is of advantage for the kits because the can not only use the territory of their mother for foraging but also the neighbouring territory of their father (Crawford et al. 2008). Because beavers can determine the family membership of other beavers olfactory (Sun & Müller-Schwarze 1997, 1998b) and the offspring with "split" parentage is related to one family group through their mother as well as to the neighbouring family group through their father, they are tolerated by the family members of both territories (Crawford et al. 2008).
The family size in C. fiber amounts to 4 animals on average; at waterways predominantly 3 - 6, at still waters frequently more than 10, with a maximum of 14 animals per family (Heidecke 1984). The young from the preceding year help actively at the provisioning of the kits by carrying food into the burrow (Brady & Svendsen 1981) or by marking the territory (Rosell 2002). The sub-adult animals are leaving their parent's territory by the end of their second year of life and in C. fiber they reproduce usually by the end of their fourth calender year for the first time (Freye 1978; Heidecke 1984; Klenner-Fringes 2001; Morgan 1868). Only in exceptional cases, like during high population densities, they will stay with their parents for a third year (Svendsen 1989; Zahner et al. 2005).

Pair formation [Back to the top]

After the two year old young have left their parent's territory in spring, they are going to search for a mating partner and their own territory (z.B. Heidecke 1984; Welsh & Müller-Schwarze 1989). What distances the animals will travel and the question if they are migrating until they reach areas currently not inhabited by beavers, have not been systematically analysed so far. Basically, in the literature mainly reports on maximal distances travelled by individual animals, which specified as 100 to 500 km, are to be found (a summary for instance can be found in Zahner et al. 2005). Frequently such reports are only single observations, e.g. if a marked animal was found by chance far away from the place where it has been marked originally (Heidecke 1984; Hogdon 1978 in Zahner et al. 2005; Saveljev et al. 2002; Stocker 1985). Thereby, the dispersal can also take place at long distances over land and even over watersheds as well (Heidecke 1984; Leege 1968; Saveljev et al. 2002). Most of theses investigations notice that animals in the age group of the two-years-old travel the greatest distances (e.g. Leege 1968; Saveljev et al. 2002; Sun et al. 2000), but do not provide any information where exactly the individual animals animals are settling down. After Heidecke (1984), the spreading of a population takes place by single animals travelling great distances prior to settling down and by filling up the remaining gaps by and by. However, during the migration phase most young of both species do not travel more than 20 km. Frequently, the animals move less then 5 km from their parental territory (Leege 1968; Saveljev et al. 2002; Sun et al. 2000). In the Elbe-beaver (C. f. albicus) Heidecke (1984) specified 26 km as the average migration distance. For the calculation only single animals, that appeared suddenly and far away from known beaver settlements were considered, so this value is certainly too high.
Some authors assume, that the kind of habitat inhabited by beavers has an additional influence on the migration distance of the animals. In populations colonising rivers without much connections between different waterbodies, the migrating, subadult beavers seem to travel larger distances in comparison to animals of populations inhabiting water systems, which are branched and show a strong interconnectivity (Crawford et al. 2008).
Data on the difference in migration distances between subadult male or female beavers is somewhat contradictory. Whereas after Sun et al. (2000) males of C. canadensis where philopatric in the western part of the state of New York, studies of Leege (1968) reveal females to be the philopatric sex in the state of Idaho. After Saveljev et al. (2002) migrating, male Tuvinian beavers (C. fiber tuvinicus) also travel larger distances than the females.
Besides, only a few authors give details on the process of pair formation in the beaver. After Wilsson (1971) the pair formation is initiated by the female, which first occupies an appropriate territory and then recruits a mating partner. After the same author, the pair formation will only be successful, if the female is larger (older) than the male. However, the observations were done with caged animals under partly very artificial housing conditions (e.g. socialisation with the animal caretaker). 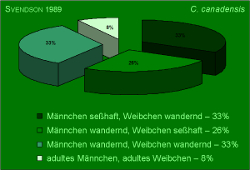 Territoriality [Back to the top] 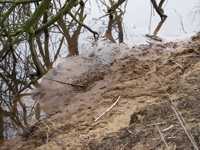 Scent mark with a decorticated stick
at the river Hase. To insure the secure rearing of the kits over the long period of two years, it will be of advantage to settle in a habitat, which can provide sufficient opportunities for gathering food or for the building of a burrow or lodge. Therefore, it does make sense, to protect theses resources against the exploitation by conspecifics. Therefore, beavers are territorial, which means, that they defend a certain part of the waterbody against individuals of the same species not belonging to their own family (Bradt 1938; Klenner-Fringes 2001). 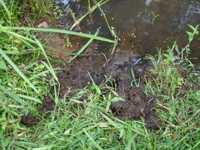 Importance of the castoreum [Back to the top]

Functions of the scent mounds. The fact that the castoreum is used - besides others - for the delimitation of the territory and therefore functions as a kind of fence has been experimentally shown by Müller-Schwarze & Heckman (1980) for C. canadensis and has also been confirmed by other authors (Aleksiuk 1968; Hay 1958; Rosell & Nolet 1997; Sun & Müller-Schwarze 1998c).
Moreover, after Eibl-Eibesfeld (1958), the deposition of scent marks is used by some representatives of the Rodentia - similar as in many other mammal species - to orientate within ones own territory. The deposition of scent marks near the burrow, as well as near beaver slides and feeding sites would plead for such a guidance function - and therefore for a multifunctional nature of the scent marks (Butler & Butler 1979; Klenner-Fringes 2001; Müller-Schwarze & Heckman 1980; Richard 1970).
According to Sun & Müller-Schwarze (1997), in contrast to the anal gland secretion, the castoreum does not contain Information concerning kinship. However, the animals react to unfamiliar castoreum with specific behaviours. This implies, that beavers are able to distinguish their own secretion from that of other individuals and that they are able to recognise, if a scent mark belongs to a territory neighbour, which is more or less familiar, or to an unfamiliar, unknown animal. Results gained by behavioural observations in field studies implemented by Schulte (1998) in C. canadensis do suggest, that beavers are able to make this distinction. Moreover, the animals should be able to assign scent marks to their respective family members because during their activity the animals are mainly solitary, have distinct home ranges within their territory and also individual feeding and/or resting sites (Heidecke 1984). This is of importance regarding the already mentioned multifunctional nature, if the secretion contains information about the diet, for instance.
If and which of the numerous components detected in the castoreum so far - i.a. alcohols, phenols, aldehydes, ketones, organic acids, esters and amines (Lederer 1946; 1949a; 1949b; Tang et al. 1995; Maurer & Ohloff 1976) - are responsible for the individual "olfactory finger print" is currently not known. Some of these substances, e.g. quinol, cinnamic aldehyde or mannitol, can be detected in the urine of mammals (Lederer 1849b). This supports the assumption, that the contents of the castor sacks, which are leading into the ureter, are washed out by urine (Svendsen 1978; Walro & Svendsen 1982). Other substances, like benzaldehyde, chavicol, borneol or pinocarveol, are components of several essential oils and originate apparently from the food.
As Walro & Svendsen (1982) have proved experimentally, in contrast to many other mammals, the urine deposited together with the castoreum does not contain any information about the identity of the marking animal.

[Back to the top]