Origin and re-introduction of the beavers at the district Emsland

Development of the beaver population at the district Emsland

The beaver population at the district Emsland goes back to a re-introduction attempt (for the definition of this term see below) by the working group Ethology of the University of Osnabrück under the direction of Dr. Klenner-Fringes and Prof. Dr. Schröpfer in October 1990.
In the past beavers were native to the district Emsland, as several names of villages and cities already suggest. For instance, the villages "Beversundern" west of Lingen as well as "West-" and "Ostbevern" (district Warendorf) near the river Ems north-east of Münster.

The procedure of the re-introduction was adjusted according to the "International Union for Conservation of Nature", IUCN guidelines valid at that time (download of presently valid guidlines as pdf-file) and was conducted in close cooperation with the Lower Saxony Ministry of Environmental Protection (Mrs. M. Griefahn), Mr. D. Blanke from the former "Lower Saxony State Office for Ecology" (NLÖ) and the former "Lower Saxony Water Management, Coastal Defence Agency", organisational unit Meppen and building yard Lehrte - nowadays combined at the "Lower Saxony Water Management, Coastal Defence and Nature Conservation Agency", NLWKN, as well as with the "Lower nature conservation authority Meppen" under the direction of Mr. L. Pott.

The animals originally released were 8 beavers (subspecies Castor fiber albicus) that have been trapped for the re-settlement in today's federal states of Saxony-Anhalt and Brandenburg respectively. The 8 resettled animals belonged to two family groups. The first group consisted out of 2 parent animals with their 4 pubs, while the second group included a subadult couple without offspring. 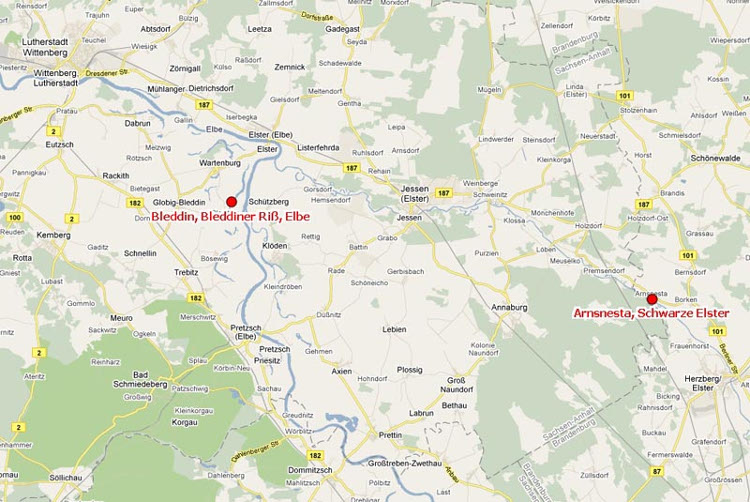 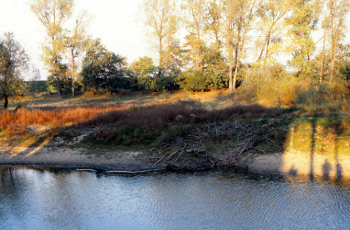 Fig. 2: Lodge of the family group in the Elbe-backwater Bleddiner
Riß. The family group with 4 pubs originated from the Elbe-backwater Bleddiner Riß near Bleddin (Saxony-Anhalt), south-east of Lutherstadt Wittenberg; the subadulte pair was trapped at the Schwarze Elster near Arnsnesta (Brandenburg), north-west of Herzberg/Elster (see Fig. 1 and 2).

The parents of the family group were both at least 5 years old and their pubs had an age of about 5 month, whereas the two subadult beavers were at least 2.5 years old.
The two parents of the family group as well as the two subadult animals were equipped with radio transmitters prior to the re-introduction, to monitor the movements of the animals during the first weeks after their release and to be able to locate and re-capture them in case of an unwanted, large-scale dispersion. 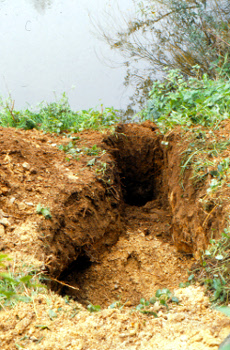 Fig. 3: Artificial lodge nearing
completion. The animals were released as family groups in order to prevent such unwanted undirected migration shortly after the re-introduction, as would have been expected from the release of individual animals without social ties.
In addition, an artificial lodge was constructed for each group (see Fig. 3), in which the animals were released out of their transport crate. The artificial burrows were designed in such a way, that a duct led towards the water from the nest chamber, which was situated higher above the water line. The animals had to dig the exit to the water themselves after they were released to the burrow. By this, the animals will develop a certain kind of local bond, which further on minimises the risk of a non-directional dispersal.

The artificial burrow of the 6-member family was situated near the oxbow Dörgen approximately at river kilometre 11.5 and the artificial burrow of the subadult pair was below the building yard of the NLWKN Meppen near the village Lehrte at river kilometre 15.5 (see Fig. 4 and 5). As expected, both groups settled in the immediate vicinity of their place of release, after they already left their artificial burrow on the first night. First, the animals only construct some forms, which they visited during their rest periods. But after some time, the beavers also dug out own subterranean burrows.

During the first year after their release (that is between October 1990 to November 1991), the 6-member family lay claim to the part of the river Hase between river kilometre 8 (road bridge near Bokeloh) and river kilometre 14. During this time the animals also used the nature reserve "Hasealtarm" (but neither the oxbow Dörgen nor the oxbow Bokeloh). The subadult pair used the part of the river Hase between river kilometre 14.5 and 18 (approximately at the mouth of the river Mittelradde) during the same time. In consideration of the more than sufficient food supply at this part of the river Hase, the territories of both families were comparatively large (6 km and 3.5 km respectively). Most likely this was due to the fact, that both groups did not have any neighbours at the beginning of the re-colonisation of the river (see Fig. 4).
The members of both families did not use their part of the river to the full extent right from the beginning. They rather increased their territories little by little during this first year. In behalf of the 6-member family, their territory reached its greatest extension approximately 6 month after the release of the animals, whereas the territory of the subadult pair reached its greatest extend approximately after 8 month. 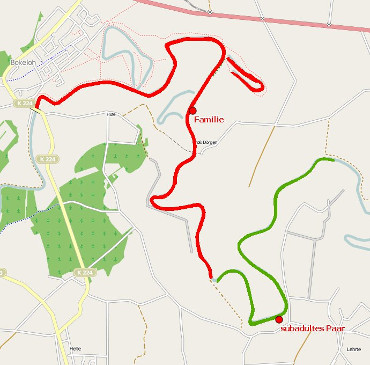 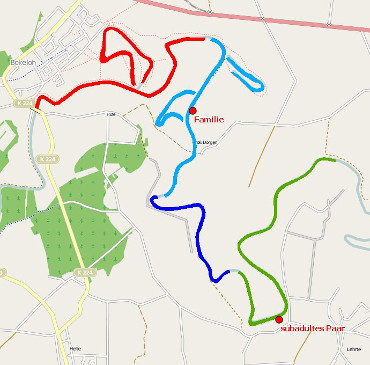 In each of the two families two pubs were born in the following spring 1991, which indicates that the animals became established quite well.
From the beginning of 1992, i.e. at the time when the 4 young animals of the family group finished their second year of life, the pubs established 2 new territories within the territory of their parents. At this time, the parents territory stretched only between km 8 and km 10.5 (length: 2.5 km), but also included the oxbow Bokeloh. One of the territories of the young animals covered the part of the river Hase adjoining their parents territory between km 10,5 and km 12,5 (length: 2.0 km), whereby the young animals also utilised the nature preserve "Hasealtarm" as well as the oxbow Dörgen (see Fig. 5). The territory of the other pubs immediately adjoined the first one and extended between km 12.5 and km 14.5 (length: 2 km). As Fig. 5 also shows the location of the territory of the subadult pair remains unchanged at this time (km 14.5 to km 18; length: 3.5 km).
It can be assumed, that siblings established the pair bonds and the two new territories in early 1992, because this is not uncommon for beavers.

As early as in spring of 1991, the number of beavers had increased from the original 8 up to 12 animals. Subsequently, the beavers continuously increased their range and around the year 1998 first territories were established in the river Ems.
The relatively slow population increase in the first years after the release of the beavers, was followed by an exponential increase in the numbers of animals, which seems, however, to slow down increasingly in the last few years. This results in a sigmoidal development of the number of beavers in the district Emsland typical for animal populations. 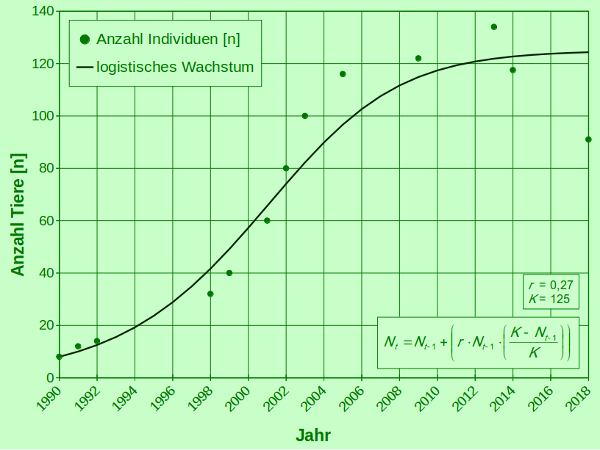 Fig. 6: History of the number of beavers at the river Hase and the river Ems and modelling of the
population development. The data from the year 1998 onwards are taken from contracts for work and labour for the
Lower Saxony Water Management, Coastal Defence and Nature Conservation Agency (NLWKN).

The logistic growth of the beaver population at the district Emsland, which is typical of many animal species, can be expressed by the following formula
Nt = Nt - 1 + (r * Nt - 1 * ((K - Nt - 1)/K))
with r = 0,27 and K = 125
(see Fig. 6). The term "r" represents the annual growth rate and the term "K" describes the carrying capacity of the population within a given habitat. It should be noted that the data used in the above diagram only applies to the long-term study area at the river Hase and the river Ems (see Fig. 7). The long-term study area extends at the river Hase between river kilometre 40 (roughly near the oxbow Wehlage) and the mouth at the river Ems, and along the river Ems between Lingen and Haren (length approximately 90 river kilometre). 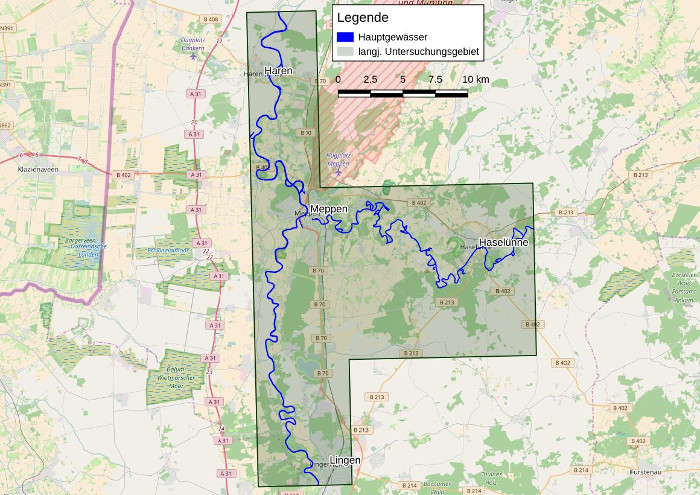 Since beavers are territorial and each family occupies a certain stretch of water for their exclusive use, the number of animals within a certain area can not rise above a certain value (in ecology this value is referred to as the carrying capacity of a that area). Along the rivers Hase and Ems (as well as their tributaries in their lower reaches) within the described, long-term study area the carrying capacity seems to be reached by now. That means that the number of beavers is expected to level off at about 120 - 130 animals and will not be subject to a significant rise above this value in the future. All subsequent animals only have the option to occupy territories, which will become vacant (for example by the death of one or both former territory owners) or to completely migrate out of the area.

Such migrations already ar already occurring, as the studies since the year 2009 clearly demonstrate. Since 2009 especially along the river Ems several territories outside the borders of the long-term study area were detected (the position of all current territories is displayed at our distribution map).
Most probably, the animals will increase their range even further in the near future especially along the river Ems (the river Hase above Herzlake is suitable only conditionally for beavers).


Re-introduction or re-naturalisation? [Back to table of contents]

In many publications on species conservation programs relating to the beaver (and other native animal species), the authors incorrectly use the term re-naturalization. Because in the past beavers were distributed almost all over Germany and the animals have been almost eradicated by actions of man only (hunting, habitat destruction, etc.), in the case of the release of the animals at the district Emsland (and elsewhere) one must speak of a "re-introduction" or "re-settlement" and not of a "re-naturalisation".

Such a naturalised, non-native or alien species is referred to as "neozoon" (plural: neozoa) in case of an animal and as a "neophyte" (plural: neophytes) in case of a plant respectively. In ecological terms such species are often summarised as "allochthonous species". Since the release of non-native species often entails big problems (uncontrolled population growth of the naturalised species and displacement of native species, introduction of new diseases through the naturalised species), such a naturalisation has to be regarded as critical and presents a "distortion of the native fauna or flora".
Regarding § 40 paragraph 4 of the German federal nature conservation act (BNatSchG in the version dated 01. March 2010) for the deliberate release of a non-native species a permission is required, as far as it is not to the cultivation of plants in agriculture, forestry or the use of animals for the purpose of biological plant protection see § 40 of the BNatSchG at djure.org). Further informations on neozoa an neophytes can be obtained from the position paper "Non-native Species" (pdf, 1.1 MB, in German) from the federal agency for nature conservation.

By contrast, animal or plant species originally native to a certain area (like the beaver in the district Emsland) - which are referred to as "autochthonous species" in ecological terms - can not be "naturalised" or "re-naturalised" but "re-introduced" or "re-settled" only. Regarding § 37, paragraph 1, passage 3 of the German federal nature conservation act, the re-introduction of decimated or extinct, wild living species within their former, natural range is defined as a task in the protection of animal or plant species (see § 37 of the BNatSchG at djure.org).

One should be aware of this small linguistic difference between a re-introduction or re-settlement and a (re-)naturalization when discussing the re-introduction of an animal or a plant species. Unfortunately, even legal texts often refer to a re-naturalisation even if a re-introduction is considered (see for instance § 45 of the Lower Saxony nature conservation act).
[Back to table of contents]