Welcome to the beaver population of the Emsland

The website about the beavers at the district Emsland (Lower Saxony, Germany) 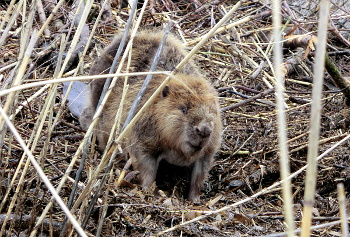 An Elbe beaver at the river Elbe. Since more than 20 years beavers live again along the river Hase at the district Emsland (state Lower Saxony) after the animals have been re-introduced in 1990. This appears to be reason enough to dedicate a whole website to these animals.

The first beavers have been released at the river Hase near Lehrte on October 1990 within a research project on the resource utilisation of a semi-aquatic mammal by Mrs. Dr. B. Klenner-Fringes at the former working group Ethology (via Wayback Machine 2007) under the direction of Prof. Dr. R. Schröpfer of the faculty of Biology at the University of Osnabrück.
From this starting point the animals disperse little by little along the rivers Hase and Ems and their tributaries.
Today beavers are present between Herzlake and Meppen along the river Hase as well as between Emsbüren and Sustrum along the river Ems.
The re-introduction of this animal species at the district Emsland can thus be seen as a success.

Population development of the beaver in the district Emsland since 1990

A short overview on the development of the beaver population in the district Emsland from the start of the re-introduction until the middel of the year 2014 can be found in the paper Ramme, S. & Klenner-Fringes, B. (2014): Zur Wiederansiedlung des Bibers (Castor fiber albicus) im Emsland. - Säugetierkundliche Informationen 9: 165 - 274. (pdf, 4,5 MB, German with English summary) printed in the journal Säugetierkundliche Informationen of the working group Artenschutz Thüringen.
An overview about the population development over time and the current status of beavers throughout Lower Saxony can be found in our article Ramme, S. & Klenner-Fringes, B. (2020): Biber in Niedersachsen. - Säugetierkundliche Informationen 11: 253 - 272 (pdf, 8,6 MB, German with English summary).

During the last years on several occaisons we did some presentations about the beavers in the district Emsland as well. An overview on the different talks can be found here (page in German language).

On the following pages you will find general informations on the biology of the beaver as well as further informations on the re-introduction and population development of the beaver in the district Emsland. Furthermore, you can find a list of scientific literature references on several aspects of the life of the beaver.
In a short tutorial we will try to illustrate and explain the signs of beaver activity you may encounter in the field. In that tutorial we will furthermore try to describe the differences between the three very similar species beaver (Castor fiber), coypu (Myocastor coypus) and muskrat (Ondatra zibethicus).
If you have made some own beaver observations at the district Emsland, you can use our distribution map to check if this occurence is already known. If this is not the case, you can - if your time permits and if you feel like - communicate your discovery to us via our contact form. Your account will be incorporated in our distribution map after verification by us.
We also appreciate notes and messages on beavers found dead. You can also communicate such findings via our contact form to us. By analysing the finding of such carcasses it is possible to determine areas (like road bridges, weirs etc.) which pose a high risk for the animals to get killed. Based on these data we might be able to submit recommendations to make changes to those areas which will make them less dangerous for the beavers in the future.
A list with related links concerning beavers may provide the visitors of our website some further possibilities to learn more about this fascinating animal.

Beaver bank lodge at the Fullener Wald in spring.